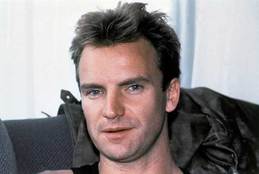 Gordon Sumner
The least of the impure motives for being a writer is a delight in the autonomy of the profession. No 2N to teach 40 odd weeks of the year for first period in the afternoon on a Tuesday, or – as happened my first two years as a teacher - ‘Leavers’ for drama the last two periods on a Friday. Leavers meant 15 year olds in those days, and I shared those end of the week periods with a P.E. teacher called Roy Moss, an experienced ex-secondary modern teacher, and general hard nut. If we arrived to a rowdy class of disaffected adolescents (who couldn’t wait to leave school) he had a simple and effective way of bringing them to order. He would just stare at them, ‘enigmatic,’ Mourinho like, and slowly slide from where he was leaning down the wall bars of the gym, till he was seated on the floor, continually staring out the ones who were still barracking till, confused by his passive-aggressive posture, they shut up. ‘Right,’ he would then say, ‘we can get on.’  I provided the ‘creative’ input to these lessons, he delivered the disciplinary framework. I learnt a lot from him, was pretty disciplinary myself ( i.e. asserting my will) particularly during my first three weeks or so with a class. Few kids got away with anything (‘No flies on this guy..’) and then, when you’d got them doing what you wanted them to do – and with one or two maybe even hating you – start the enjoyable ‘proper’ teaching. I learnt on the job, without teacher training and maintain a scepticism about the current emphasis on professional qualifications. Do nurses need to have a degree? They need to be kind and competent. A teacher should have a love of his subject, a ‘natural’ authority, and a capacity to inspire. Twenty years before the National Curriculum I taught what I wanted to – plenty of discussions, a lot of literature. I also introduced drama into the classroom (I was an English teacher) where it hadn’t been before. We’d push the chairs and desks back and act out and improvise little plays: ‘The Miser’ was the one I started with – ‘How do we show he’s a miser?’etc. Once we were interrupted by the Senior Mistress, a ‘Miss’ of a certain age, who said, ‘Oh, is this a lesson?’ I thought, ‘Yes, and a hell of a lot more interesting than any of yours.’ A handful of pupils from those days (I was only 21) have become my friends, and I value that link with that near vanished world close half a century ago.

I remember how strange it was to give up teaching after seven years, days free in which to write (and, for a couple of years, mainly fail). I’d wander into the small Yorkshire town where I lived and people would say – though I’d had a couple of television plays broadcast while still a teacher - ‘When are you going back to teaching?’ To become a writer is an act of will. I had almost nothing to show. I was glad of my agent’s belief in me, her discrimination with my stuff She had some top notch comedy writers on her books – Esmond and Larbey; Roy Clarke – and, knowing that, I tried to develop and write an episode of a self-penned sit com. ‘You need to be born to write sit com,’ she told me, having read my pale effort. So Penelope Keith was never troubled by me. Roy Clarke (’Open all Hours’, ‘Last of the Summer Wine’) lived not far away in that corner of South Yorkshire (in a converted windmill) and we met at that time. Sheila, our agent, had turned down a lucrative job he’d been offered on a long running series - without telling him. It was a time, he told me, when he could have done with the money. Sheila did the same with me. I wrote an episode of a series called ‘Strangers’ at that time for Granada. Peter Eckersley, Head of Drama at Granada, wanted to get me in to write ‘Coronation Street.’ This was turned down by Sheila. I heard about it at a suitable interval later – presumably when I had another ‘nice’ commission: ‘Coronation Street’s not you. You’re better than that.’

She was right in the sense that I don’t like to work to other people’s guide lines (asserting my will?). On ‘Strangers’ – one of the very few series episode I have written (see ‘The Perils of Prime Time’) the producer silently altered my dialogue between my last (pink printed) draft and the (blue coloured) rehearsal  script that went out to the actors. The script arrived through my door and I was unpleasantly surprised – but too wet behind the ears (and grateful for the work) to complain. Cut forward to the read through in Manchester. Hywel Bennet, playing the lead, says, ‘Before we start, I liked the earlier pink version of the script, which was why I accepted the part,’ – and read out a pair of contrasting lines. I’ll always be grateful to him. My version won.

The most impure of the motives for being a writer is working with well -known actors. Bennet had a huge success at that time playing Ricky Tarr (a recent Tom Hardy part) in ‘Tinker, Tailor, Soldier, Spy.’ Getting on the bus heading out from Manchester to Bangor on Dee racecourse, where we were filming a sequence of ‘Strangers,’ was a strikingly (dyed) blonde young man, who was with Frances Tomelty, one of our leads. He was introduced to me as Gordon. He, like me, didn’t really have a role on set (writers don’t) and we got talking in that racecourse setting. He was a singer, had recently done some German Opera. Frances said to me, ‘He’s in a group. They’re very good. You ought to hear them.’ But, by the parade ring, this tall Geordie was much more interested in me as a young writer than I was in him. Roll on a couple of years and I’m hearing ‘Roxane’ on the tannoy of shops – you can see where this is heading… ‘Message in a Bottle’ was on Top of the Pops, the blonde lead singer pushing his face towards camera, and I thought, ‘I’ve seen him before somewhere’. I think it’s the John Buchan/Richard Hannay idea that the best form of disguise is simply to take yourself out of the accustomed, familiar context. I couldn’t place him and assumed he had been – maybe - a model I’d noticed somewhere. Another year later there’s an Observer profile of Gordon Sumner from Newcastle who shelters under the pseudonym of ‘Sting’.

Well, as the years have gone on, you walk into a Covent Garden restaurant with Dame Judi along with the Leader of her Majesty’s Opposition  realising it beats a session at the White Swan, Maltby, South Yorkshire – though I’ve had some happy times there, which I link with E.L.O. (what happened to them?) and ‘Mr. Blue Skies.’ Hobnobbing with the famous is no way to run a life, of course, (‘Meryl, have you met the Pope?’) and will only see you so far. The Dame (I had worked with her husband) suggested I wrote a play for her. Maybe she says that to all the boys: David Hare obliged and it seemed she didn’t like the result much. Needless to say and sadly I can’t write things that way round. A number of the ‘names’ – too many – crop up in these notes but my feeling has been they make more interesting reading than , say, the golf bore, Peter Allis’ reminiscences about ‘Bertie Calthorpe’ who once made a hole in one in 1957 at the thirteenth tee. But mainly they are people who are at the top of their profession for the reason that they happen to be very good at what they do. And I’m happy – thrilled – to have been associated with them. If you want to get on, improve, work with people better than you. I did a bit of networking my early days in London (and can still, I’m told, ‘work’ a party) but, essentially, I buckled down to work. A (then) young writer I looked after at the National and was fond of, whose career was getting going, used to hold parties increasingly full of influential names in fashionable spots around London – the last I went to was in a distressed warehouse in the East End. My writer friend has since disappeared into the stratosphere. You ring – at a suitable time for a writer - and are as likely as not to get ‘an assistant.’ Is this sour grapes? No, I know where the writer comes from and the tensions and insecurities of his/her background. But having an assistant (one hopes simply for the admin) is not my idea of writing. My networking writer friend also works all hours. I don’t. Five hours max. I can do deadlines, but prefer to push on at my own pace. I have turned some good work down in the past, fearing the (A level revision) nightmare of working into the night and then again early mornings. And I reflect that the woman who got me into writing, Enid Blyton, (‘Why I Write’) even at her most industrious – a book a week -  didn’t have an assistant. Nor, while we’re at it, my heroine, Jane Austen…or -  hero - E.M.Forster. At my more Steady Eddy level, I’ve been writing full time for forty years, enjoying it for the most part. Max Stafford Clark, at the Royal Court, used to talk of the short lives of playwrights. I don’t know about that. Maybe most of us have only a couple of great plays in us (if that). I wrote in the previous essay of the perils of being a classroom teacher – burn out, basically. Only once have I felt burnt out (or baffled) and I went a long wander to cure it. Keep at it, but never force it. Write what you want to write, while open to advice (which you can ignore). Pace yourself.. and don’t bother with an assistant…please. The ‘office’- and punishing hours - is what most of us came to writing to escape from.
UA-64175706-1