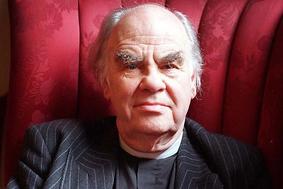 I was late for his funeral, getting off at a tube stop too far along the north of the river, and having to run back between bridges south of it. I arrived at Southwark Cathedral just in time, breathless. And there was his coffin, on top of the hearse, waiting outside the gates, nobody – at that moment – around. At least I presumed it was his coffin (‘frequent hearses’?). It stopped me in my panicky tracks. I paused, nodded and went in. The church was packed – it’s a Johnny- come- lately cathedral, once St. Mary Overy. Shakespeare’s brother is buried there; the playwright paid for a special peal of bells that December day in 1607 – the Thames frozen over. I’ve written a play about the events that surrounded the death of the 27 year old Edmund Shakespeare. (A recent stage version is available on this website as an appendage to the News Section). There’s also an impressive tomb to the poet John Gower, who features in the play. The now-cathedral of Southwark is not especially large and crammed into it, that afternoon, over four hundred years on, were the great and the Anglican good, there to mourn (and celebrate) the life of Canon Eric James. Eric is best known as the go-to preacher for ‘Thought for the Day.’ He was also the main author of ‘Faith in the City,’ the Church of England document that, in 1984, so incensed Mrs. Thatcher. Eric also drafted a great many of his friend Robert Runcie’s sermons.

I met him through my webmaster. ‘Webmaster’ suggests a Steve Bell/George Osborne figure in dominatrix wet suit. The chap who runs this site is, in fact, a priest, a worker-priest, who runs a charitable foundation a couple of hundred yards from where Eric lived in Kennington. I am Hugh’s only ‘client’ (apart from a couple of monasteries). Hugh invited me for a meal in the very early Nineties. One of the guests was Eric. Eric was gay and made no secret about it (unlike many clergy at that time), was one of the first men to come out of the cloth, so to speak. The Freddy Mercury of his profession, I once told him – he had a vague idea of whom I was referring to. Like Freddy, he never disliked publicity (though I didn’t say this). He should have been a Bishop but a big row with Mervyn Stockwood, his Bishop, a breakdown and a period out in the cold back in the 70s probably ruled that out. The open gayness didn’t help his chance of promotion, either. So he settled for being a canon. ‘Loose Canon’ he thought might have been a title for an autobiography, but like me, he wrote about himself in bits, in his case through a number of devotional books.

He may have taken a shine to me that evening. I was next to him at Hugh’s first service as a priest in Stoke Newington and (maybe, though I don’t quite remember) at the earlier ordination service at St. Paul’s. The Stoke Newington service was a bit happy-clappy and Eric, in stage whisper, said to me: ‘This is not quite my style.’ It turned out not to be Hugh’s either. Then he asked – he was never shy of getting you to do something for him - ‘Do you have a car? Do you live near Kennington?’ It was ‘yes’ to the first and ‘no’ to the second but I gave him a lift home, a terraced house in the middle of a tiny crescent, overlooked by tower blocks. I was working for the BBC Drama Department at the Guinness trial in Southwark, and Eric was interested in the City and its ways, making clear that my thoughts and conclusions might well find their way into the Archbishop of Canterbury’s sermons. Well, Guinness almost finished me as a writer. I fell into a depression as a result of my failure with it – and started seeing Eric.

Think of him as my psychiatrist, he in one chair (the accompanying photograph gets him precisely) in the comfortable Kennington interior, a fire lit between us, the baby grand piano (which he played, though not in my company) at the back of him. The room is lined with books. The piano’s lid tipples with papers; the mantelpiece is full of invitations. I ramble on about my unhappiness; he’s interested in what ‘keeps you from God.’ He’s particularly interested in the (early) death of my parents and quotes Tennyson: ‘Those in whose laps our limbs are nursed, fall into shadow, soonest lost. Those we live first are taken first…’ He gets the low down on my (then) wandering, casual sex life. And the confession takes an unusual turn. He tells me of encounters with American military personnel in the blackout during the war. ‘And on the morning “Faith in the City” was being announced to the Press, I was arrested for cottaging. A near disaster. The shame I could have brought to Robert Runcie…’ Eric, who seldom wore a dog collar, and hadn’t been doing so that morning next to the agent provocateur, wasn’t so pole-axed and upset at his arrest as not to get a good solicitor. Eric was well connected (it almost defines him), and being Chaplain to one of the Inns of Court helped. He was also one of the Chaplains to the Queen, so the stakes were high. His solicitor told him to plead guilty and get it over with quickly, not to say he was a priest, or certainly not such a conspicuous one (he was over retirement age and looked it). And escaped to tell the tale (to me and many others years later) –just another old guy who wanted a hand job. Well, these kind of revelations make you feel better about yourself and your own ‘sinfulness’. He wasn’t so tolerant on drugs, objected to my having even a cigarette in the pub we used to wander to, where I had a red wine and he angostura bitters and tonic. He’d got this failing writer in his sights as a would be priest – or monk (see ‘The Year’s Midnight’), had plenty of tales of how he’d intuited vocation, and one particularly good account of physically preventing Richard Chartres, now Bishop of London, from abruptly pulling out of ordination training. Chartres was at his funeral that day in Southwark, and also at Eric’s Eightieth, a grand affair at St. Paul’s, which featured a full orchestra and choir performing ‘The Dream of Gerontius.’ I remember the lead up to this event, Eric ‘backing into the limelight’ as one of his friends put it. I also recall that he went downhill in terms of health after this huge celebration was over.

He was right and wrong with me as a priest. I blow hot and cold with Christianity but it’s been my language (so to speak) from my days as a choirboy, and I’ve always been comfortable with priests. (Eric had much amusement at someone less au fait describing him as ‘Eric James, the distinguished theologian’). When I had the experience I describe in ‘Bumping into God in Kent’ that May morning twenty five years ago, it was Eric I told about it, and burst into tears. There’s a danger, needless to say, of this all sounding Anglican High Church campery. But I certainly wasn’t going to join any Church which didn’t fully accept my homosexuality. What was I traipsing round the West End for in boots and leather jacket (see ‘Bad Company’)? This made Eric angry, ‘get on with it’, and finally disappointed with me. He had buckled under after the War, though no longer kept his sexuality a secret. What he did do, as turned out, was help me get going again as a writer. He had written a stylish and entertaining piece for ‘The Listener’ about an eccentric don and Fellow of Trinity, Cambridge: Simpson. Eric had been chaplain at Trinity, probably the first working class pastor that place had seen. Simpson, a lonely man, had latched himself onto Eric, and cheerfully exploited his kindness. The first time I read it I found Simpson unsympathetic, and then saw the potential for a play, ‘The Good Samaritan,’ about a man struggling with – and perhaps recovering - his faith. I got it commissioned with the help of my friend John Burgess, who had been at the National Theatre Studio and was doing radio work at that time, then wrote it in a week under a fig tree at the remote place in France where I was then staying. I don’t think we altered a word. This was after years of struggle and near stasis with ‘big’ plays about politics and the City. The play was comic, raced along. I have never looked back. ‘Answered Prayers’ (which I call my best play) also emanated from Eric, who passed on to me an account (written by a Mirfield monk, Geoffrey Curtis) of the life of William Sirr, essentially a solitary religious. It’s not far from a tragedy. They were, respectively the first and the third play in a sequence of – now – seventeen  radio plays (roughly one a year) since the turn of the century. Eric particularly enjoyed my Radio Three play about Shakespeare, mentioned above, ‘The Pattern of Painful Adventures’ – Shakespeare and some of his religious contemporaries (Lancelot Andrewes being one) being one of his specialities. It’s Lancelot Andrewes whose sermon, ‘A cold coming we had of it’ was taken by T.S. Eliot for the start of ‘The Journey of the Magi.’ So, after a period of impatience with me, Eric could see I was doing ‘well’ again, though would have preferred me as a priest, I think. And since my heart job, it’s me drinking the angostura bitters and tonic these days. I used to turn back on leaving the Kennington house to watch Eric seeing me off before I turned the corner, thinking, ‘This might be the last time I see the old fellow.’ In fact, the final meeting was in Charterhouse, where he finished up – in (no surprise) great comfort. It had been a bad morning. He had to see the doctor. There were problems as well with his teeth (or spectacles). I had come a long way but he waved me away, ‘Come and see me another time.’ He could be imperious and controlling as well as fond. He once planted a big wet kiss on my lips between the double doors of the little restaurant we used. ‘Forgive me,’ he said. But if he had been married and ‘fulfilled’ like many of his friends he wouldn’t have been so available to jerks like me. His own limitations and failings made him, like St. Paul – to my mind - the better Christian. And if his creed is true, there’s the off chance I might see him again, though no doubt changed, utterly changed, and caught up in glory - a glimpse of which I received on that May morning twenty years ago. I doubt it, but hope so.
UA-64175706-1